Remember how Kanani looked when she came here from Ebay? Dry wig, smudge marks on her face, lipstick traces, misapplied people makeup on her face? It was obvious she could be rescued, but she required a lot of work. After her arrival, I managed to get rid of most of the smudge marks on her face and entirely remove the extra makeup and applied copious amounts of braid spray to her hair. While her hair was less ratty than it was when she came here, it was still pretty dry in comparison to the dolls I’d bought new. I got fed up with her dry hair and ended up cutting it just past her shoulders. I was still disappointed in how dry her hair still was even after applying braid spray multiple times for several months. I also didn’t want to bother with Downy Dunking — I don’t have the time, patience or space. I decided to rewig her instead–this is what she looks like now! GoodDaySunshine at American Girl Collectors sent me a spare Marie-Grace wig this week after I’d asked about good alternative wigs for Kanani. It turns out the wig was a really close colour match; both Marie-Grace and Kanani have honey-brown hair with blonde streaks. The main difference is that Kanani’s wig is a bit curlier out of the box, whereas Marie-Grace’s just has the slight curl at the end. Marie-Grace’s hairstyle (at least without the pincurls) is much easier to manage for me than Kanani’s out-of-the-box style; I have a hard enough time with Caroline’s hair. The rewigging wasn’t that difficult; I was able to get off the old wig with the pointed end of a screwdriver and a pair of scissors (I didn’t want to keep the old wig anyway; it was too dry). I then glued the new wig on and gave her a subtle side part as opposed to the centre part Marie-Grace would have had.

Kanani is my second custom and my third rewig.

I recently found a Kanani (the 2011 AG Girl of the Year) on Ebay for a price that didn’t make me cry. She was in need of ‘doll whispering’ (to use Neth of American Girl Outsider’s phrase), but she wasn’t completely trashed. She’d been up for a few days and I was surprised she was still available by the time I decided to get her, considering that every other Kanani in similar condition was much more expensive.

Here’s how she looked when she was listed on Ebay (photo taken from the Ebay listing):

As you can see, Kanani’s got a lot of lipstick marks and shines on her face from the person who’d had her last. Friendly reminder not to put human makeup on dolls – it never looks good and it will end up being difficult to take off down the line. Her hair’s also a bit dry.

Here’s how she looks after some scrubbing (and putting some clothes on!):

Still not perfect, but definitely an improvement. The shines are still there and I’ll get rid of those with a Magic Eraser in a few days, but most of the heavier makeup stains are much less visible with some soap and water. I’ve also put some shine back in her hair with some braid spray, though I may need to do a few more applications over the next few days to get it back to something closer to its original lustre. Kanani managing to out-Grace Grace in some of her clothes. For some reason this appeared as a complete post before it was actually meant to be posted. I withdrew the post and turned it into a draft, but it appears as though it was up for a while. Sorry!

Anyway, I recently acquired a Caroline from Ebay. She came with her full meet outfit and accessories, though she was in played-with condition, with tangled hair, traces of lipstick on her lips, some random stains on her vinyl, and drawings on her torso. (This is why you don’t give AGs to 5-year-olds – no wonder the kid’s parents were selling the doll after they drew all over her!) She was obviously salvageable, but this project did take some work. I started off by getting rid of the lipstick and the stains on the vinyl, just using a wet paper towel to get rid of everything. This took about twenty minutes or so. I got a bottle of braid spray afterwards and got to work on her extremely tangly, but salvageable, hair. I put quite a bit on, brushed it in, let it sit for a few hours and then brushed it again. It’s much shinier than it was when she got to me, and her hair is no longer tangled, though the hair is still more wavy than curly if you don’t finger-style it.

The next step is to remove those obnoxious drawings on her torso. She’s just wearing clothes that cover the marks for now, but I’d eventually like to get them off. The problem is that that step may require unstuffing and having her dry out for a few days, which will be kind of annoying. If I can find a way to get rid of them that doesn’t require going through that, I’ll try it. If I have to though, it’ll be fine; it’s not the first time I’ve unstuffed dolls to repair them. I had a Felicity here about a year ago whose joints were loose and I had to tighten the strings. 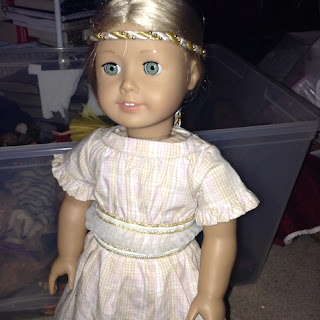 Unfortunately I didn’t take any photos of what she looked like before starting the Dolly Rehab process.